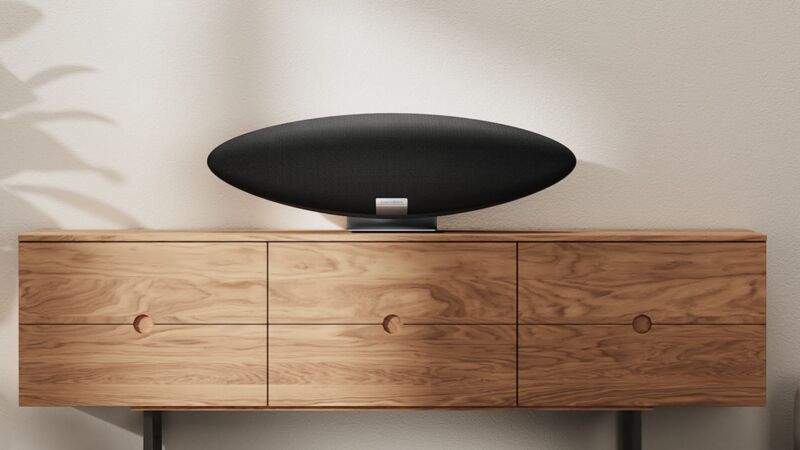 England-based audio brand Bowers & Wilkins is offering audiophiles another ride on its Zeppelin, but this time, there’s a new friend on board. The Zeppelin speaker that was announced on Wednesday marks the first new addition to the series since 2015. It’s flying into the new age by integrating Amazon Alexa and some newer technologies for reducing wireless latency.

Bowers & Wilkins’ Formation series of wireless speakers got Alexa in 2020, but this is the first time the smart assistant gets a ticket for the Zeppelin. For those who would prefer not to speak to Alexa, the speaker has physical buttons, too.

The latest Zeppelin continues the series’ flight toward going completely wireless. Bowers & Wilkins’ original Zeppelin in 2007 was an iPod dock, while the 2011 Zeppelin Air still had a dock but added Apple Airplay. In 2015, the Zeppelin Wireless dropped the dock but offered a 3.5 mm connection. Today’s Zeppelin has no wired option, except for a USB-C port that’s for service only.

Bowers & Wilkins is relying on some of the latest wireless tech to help ensure this decision doesn’t result in lag-laden jam sessions. iOS users can connect via AirPlay 2, which also provides multi-room support. For those who don’t use iOS, there’s the aptX Adaptive Bluetooth codec. Unsurprisingly, the aptX Lossless extension for aptX Adaptive isn’t present, as Qualcomm only announced it in September.

The brand says the new Zeppelin is all about the “streaming age.” Like the prior Zeppelin, the new oblong speaker supports Spotify Connect. Downloading the Bowers & Wilkins app lets you control the speaker and use other music-streaming services, including the hi-res-focused Tidal and Qobuz.

Bowers & Wilkins also plans to add multi-room support for non-iOS users in “early 2022″ and suggested that it will continue to update the speaker’s software over the years.

Bowers & Wilkins has outfitted the speaker with a pair of 1-inch double-dome tweeters, two 3.5-inch midrange drivers, and a 6-inch subwoofer for low frequencies. The speaker supports a frequency response of 35–24,000 Hz. According to the company’s announcement, the drivers are “arranged in dedicated left and right speaker assemblies around a central, large subwoofer” and are driven by 240 W in order to fill a room.

Bowers & Wilkins thinks that’s enough to justify a price increase to $800—$100 more than the prior Zeppelin, the Zeppelin Wireless. Of course, there are plenty of Bluetooth speakers for much cheaper that also offer Alexa, Airplay 2, and the like. Bowers & Wilkins will have to prove its worth with sound quality (especially around hi-res) and functionality.

Pumpkin Buckets as the Perfect Gifts this Halloween